Urban district heating (and cooling) in Vitoria. Vitoria, with a population of 254.445 inhabitants, wants to take an ambitious leap in its commitment to carbon neutrality and for this it is going to study the needs, opportunities and characteristics of creating a heat (and eventually cold) network that supplies decarbonized energy to the entire city. This is stated in the contract that the Governing Board has recently put out to tender to hire the consultancy that will help the City Council define the heat network, a rehabilitation plan associated with that network and a coordination and accompaniment office. The planned budget for these consultancy tasks is 169,398 euros (VAT included) and the execution period is 10 months.

Vitoria is part of the European mission of Climate Neutral Cities, with which it has assumed a commitment in this regard. In fact, one of the largest consumers of energy and emitters of greenhouse gases is the heating and cooling sector (according to Eurostat, it accounts for up to 65% of energy consumption in European homes), which is why it is essential act to achieve climate neutrality for the city by 2030. With this objective, the City Council plans to reduce consumption on the one hand and decarbonise energy generation on the other.

In this sense, the mayor explained that, taking into account that the heating of buildings in the city is currently based mainly on gas and to a lesser extent on other sources (including diesel), “a network of heat at of city would greatly accelerate and facilitate the process of energy transition to decarbonized sources”.

One of the peculiarities of the project is that it will also take into account the potential demand for cold, currently very limited in the city of Vitoria, but which could change in the future due to the effects of climate change.

To this possible deployment of the decarbonised thermal network applied to the entire city, with associated heat plants, would be added a driving plan for energy rehabilitation and energy efficiency associated with the network, which would include renewable generation and the installation of electric vehicle charging points.

The global project also provides for the creation of an office for project coordination and citizen support, linked to the network and to the execution of the rehabilitation plan.

The technical consultancy is being tendered to support the Vitoria City Council in the process of prior definition of the heat network, the rehabilitation plan and the coordination and monitoring office. In addition, the winning company must prepare the bidding framework and subsequently help in the preparation of the technical and administrative specifications with which to bid for the works and/or concessions, among other functions.

What does an urban district heating and cooling network consist of?

An urban district heating (district heating and cooling or DHC, for the term used in English) is an infrastructure that allows the supply of thermal energy to multiple buildings at the same time. This energy is used to produce heating, cooling and domestic hot water for buildings. Therefore, it is a system that replaces conventional equipment that currently produces heat and cold inside buildings, such as boilers and electric chillers.

The urban hot and cold network helps to decarbonise its surroundings, since the district scale favors the integration of local and renewable energies. The European Union defines heating and cooling networks as efficient if they incorporate more than 50% renewable or residual energy. To achieve this goal, the systems have been evolving and lowering the heat supply temperatures in order to increase energy efficiency and incorporate renewable and local energy.

The heat and cold networks are a technology that has not been developed so far in Spain, but which is effectively associated with the use of renewable energies from the subsoil. The Aranda de Duero biomass heat network is one of the 10 success stories included in the EC report on heat and cold networks in Europe, as are other projects such as heat recovery for the London Underground, the use of geothermal energy at the Bordeaux Wine Museum or the recovery of heat from data centers in Odense (Denmark). In each case study, the report discusses technical solutions, business models, collaborations, and governance.

Reinva has been supplying combustion equipment for district heating plants designed by the Basque manufacturer E&M Combustión for years, as well as commissioning this type of thermal installations that generate heat for the supply of hot water and heating to thousands of users. The company, which has implemented this technology in the Nordic countries, areas of Eastern Europe and China, compares the operation of this type of underground pipe network systems with water, gas or electricity distribution networks.

In Reinva’s vision, apart from the contribution provided by the sustainable fuel used in recent years, heat networks are a generation and distribution system that presents a higher performance due to minimal thermal losses, as well as its long useful life and easy installation maintenance.

In addition to their use in areas of high citizen concentration, urban heating networks can also be used in livestock farms and industrial plants, which due to their activity are capable of recovering residual energy from thermal processes in industry or electricity generation.

Reinva is a company specialized in the design, manufacture, maintenance and after-sales services for industrial steam processes and combustion installations, with the contribution of equipment and services, among which are industrial boilers, combustion systems, heat exchangers and water treatment tecniques feeding to the boiler, with the aim of achieving energy savings in the facilities.

Reinva directs its activity to the area of ​​engineering for the application of combustion technologies to industrial steam processes for more than 40 years. The company is focused on offering products and services aimed at optimizing the productivity of facilities that require heat and steam in industrial processes. It is firmly committed to sustainable development, supported by its engineering department, which develops projects aimed at contributing to mitigating climate change.

Reinva undertakes the repair of a steam boiler for... 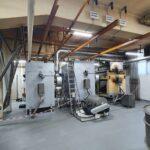